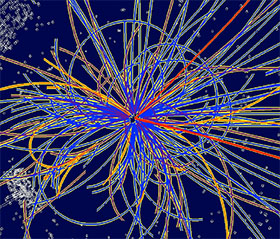 Quantum chromodynamics (QCD) is the established theory of the strong interactions, one of the fundamental forces of Nature. It encompasses some of the most striking, and to a large extent still mysterious properties of nature: confinement, according to which, the elementary constituents sensitive to the strong interaction (the quarks and the gluons), are never observed individually but only as bound states (the hadrons), and the spontanous breaking of chiral symmetry, responsible for the largest part of the mass of these bound states. At high temperature and/or densities it predicts a deconfined phase of matter, the quark-gluon plasma, whose search and study has shaped past, present and future experimental programs and which could be relevant to the early stages of the Universe or to the physics of certain dense stellar objects.

QCD is formulated as a consistent quantum field theory, and possesses a considerable predictive power: One can in principle derive the hierarchy of the masses of the hadrons and at the same time the hadronic and nuclear decay rates and scattering cross sections. One can also investigate the phase transition to the deconfined phase of matter as a function of the temperature, at zero baryonic density. However, QCD being a non-Abelian gauge theory, computing physical quantities in its framework poses formidable technical challenges, which call for the development of new, perturbative and nonperturbative, analytical and numerical, calculation methods. Furthermore, the behavior of an asymptotically-free theory being notably counter-intuitive, arriving at a clear physical understanding of the observed phenomena is always an achievement.

For these reasons, although QCD was set up as early as in the seventies, many fundamental questions are still awaiting satisfactory answers. How are the constituents of the nucleons, the quarks and the gluons, distributed spatially? How does the spin of the nucleons result of the spins and orbital angular momenta of their constituents? What is the detailed structure of the QCD phase diagram beyond the main division between a confined and a deconfined phase? How should one think of the nonperturbative regimes of the theory, at strong coupling, or at weak coupling but large field strength? How does the classification of phenomena into perturbative or non-perturbative depend on the details of the necessary gauge-fixing procedure? These are some of the questions addressed by the particle physics group at CPHT. Studying QCD at a fundamental level in close connection with the latest experimental data collected at running (or proposed) accelerators or colliders is indeed the main focus of the group. We investigate theoretically several complementary aspects of QCD, from the very structure of the nucleons as seen by low-energy probes, to the properties of dense hadronic and nuclear matter in collisions involving hadrons and nuclei at very high energies.