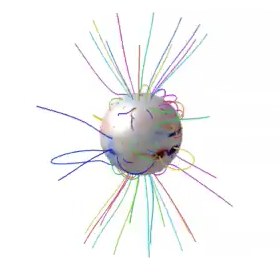 The group "Théorie des plasmas" has two major research axes concentrated on the research of magnetized plasmas and laser-generated plasmas. The group is specialized in the theoretical and numerical modelling of astrophysical plasmas, laboratory plasmas in the context of thermonuclear fusion through magnetic confinement, ion propulsion, laser-plasma interaction in the context of inertial confinement fusion, interaction of ultra-short laser pulses with dense plasmas and non linear laser pulse propagation through matter.

Astrophysical plasmas
The astrophysical activity focuses on space plasmas in the solar environment, and also in the Earth environment when Earth/Sun interactions are considered.
The mechanisms associated with observed eruptive events are investigated. These studies are carried our using data stemming from current missions such as NASA’s Solar Dynamic Observatory, or future missions like Solar Probe or Solar Orbiter. Numerical codes exploiting this data and others allowed to study their evolution, at the scale of active centers in cartesian geometry with XTRAPOL and METEOSOL, or at a large scale in spherical coordinates with XTRAPOLS, or even multi-scale with MeshMHD.
This approach leads to the identification of the role of magnetic structures called « twisted magnetic ropes » and « magnetic cages » in the triggering of solar eruptions.
Thanks to its unstructured adaptive mesh, the MeshMHD code also allows to study the heliospheric environment at large scale as well as its interaction with planetary magnetospheres such as the Earth’s.
One of the goals is to study the mechanisms at the origin of the important temperature difference between the Sun’s surface (the photosphere) and the higher layers: the chromosphere and the corona, which are notably much hotter.

Magnetic fusion
Tokamak thermonuclear plasmas are studied numerically using the XTOR code, in its fluid and hybrid kinetic/fluid versions. Macroscopic Alfvénic modes, which are observed experimentally, can be simulated, which allows to study in details the mechanisms of fast magnetic reconnection, or tearing instability of the magnetic surfaces. The hybrid fluid/kinetic version allows to understand the influence of hot ions (e.g.: fusion alphas or heating neutral beams) on the plasma stability, via resonances between the waves and the characteristic frequencies of ion motion in the torus. There is ongoing work to model collision phenomena in order to obtain the shape effects of the ion velocity distribution in a self-consistent way.

Kinetic simulations
Fully particular (Particle-In-Cell) simulations allow to study the mechanisms of anomalous electron transport through a magnetic field in Hall-effect ion thrusters. This anomalous transport is due to the nonlinear coupling of the electron cyclotron drift instability with the emission of secondary electrons at the thruster wall.

Laser-plasma interaction in the context of laser fusion
The activities in the context of laser fusion are currently concentrated on the modelling of fundamental processes of laser coupling with under-dense plasmas where plasma waves and plasma flow influence the propagation of the laser light. Wave-wave coupling provokes parametric instabilities, like stimulated scattering and light filamentation, which are deleterious for a good laser light absorption. The understanding and the appropriate modelling of these instabilities is in the centre of our current efforts; the challenge is to be able to describe the laser propagation in the presence of these processes under the realistic conditions corresponding to the present day configurations of laser fusion experiments.

Interaction of ultra-intense short laser pulses in plasmas and their applications
The coupling of ultra-intense laser pulses with dense plasmas is an important field of research, in particular with the access to PW-class lasers. It concerns both the comprehension of the transport of laser-generated relativistic electrons inside the plasma, as well as the acceleration mechanisms that emerge both from these fast electrons, namely ion acceleration from high-density targets.
We have a strong simulation tool, a multi-dimensional collisional Particle-in-Cell, with which we study laser-plasma coupling, particle transport, and the efficiency of acceleration schemes, both for electrons and ions. We are currently investigating how the acceleration efficiency can be improved by imprinted surface structure on the target interface.

Nonlnear light matter interaction at moderate laser intensities
We develop new models and numerical tools for understanding fundamental processes associated with laser-matter interaction at moderate intensities in the range from 1 to 100 TW/cm2, and femtosecond filamentation physics. In particular, our activity is focused on the generation of secondary radiation such as broadband super-continuum spectra and THz radiation. In parallel, we worked on applications of filamentation such as laser guided discharges, micro-machining of glasses with femtosecond laser pulses undergoing filamentation, atmospheric applications such as filament-based detection of pollutants, and the generation of underwater acoustic signals by femtosecond lasers.