The center for Theoretical Physics (CPHT) at Ecole Polytechnique gathers research scientists working in diverse domains of fundamental and applied Physics. The overall coherence is assured by the corpus of common, transposable, mathematical and numerical methods.
CPHT is a joint research unit of CNRS and Ecole Polytechnique, and has a partnership with the Collège de France. His director is Jean-René Chazottes, Senior Researcher at CNRS.
CPHT is on the campus of Ecole Polytechnique, buildings 5 and 6. The reception offices are located in building 6 , offices 06.1046 and 06.1045.

Write an email to someone at CPHT :  : firstname.lastname@polytechnique.edu

The lectures will be centred around the theory and applications of duality in the context of interacting particle systems and non-equilibrium statistical physics models. Duality is a powerful tool in Markov process theory, allowing to connect two processes (the process under study and its dual) via a so-called duality function. Often the dual process is simpler, e.g., in systems coupled with reservoirs in  the dual the reservoirs are replaced by absorbing boundaries, or in infinite interacting systems, the dual is a system of finitely many particles, or in the context of diffusion processes, the dual is a simple discrete jump process.
We show how to understand dualities from the point of view of an underlying Lie algebra of symmetries (operators commuting with the generator).
This approach gives several new dualities, and new duality functions, such as orthogonal duality functions. It also allows to constructively define processes with dualities, and to find ``correct’’ asymmetric versions of symmetric models with dualities (via so-called q-deformation).
We will explain this theory starting from simple examples (such as independent random walkers, exclusion process, inclusion process), and provide several applications in the description of non-equilibrium steady states as well as in hydrodynamic limits and fluctuation fields.

Title: Large deviations of the top eigenvalue of random matrices and applications in statistical physics

Abstract: The statistical properties of the largest eigenvalue of a random matrix are of interest in diverse fields such as in the stability of large ecosystems, in disordered systems and related stochastic growth processes, in statistical data analysis and even in string theory. In this talk I will discuss the developments in the theory of extremely rare fluctuations (large deviations) of the largest eigenvalue using a Coulomb gas approach. I will discuss in particular the third-order phase transition which separates the left tail from the right tail, a transition akin to the so-called Gross-Witten-Wadia phase transition found in 2-d lattice quantum chromodynamics.

Abstract: In this talk I will first explain the concept of the hydrodynamic limit of an interacting particle system. The idea is that one wants to show that when both space and time are rescaled (appropriately), the limiting densities of particles satisfy some PDE. This will be illustrated with the Symmetric Exclusion Process. Then we move this basic particle system to a hard context: Riemannian manifolds. I will highlight which challenges arise in the curved setting and how we deal with them. Joint work with Frank Redig.

Abstract: The theory of large deviations is concerned with the limiting behaviour on the exponential scale of a sequence of random variables. A fundamental result is Cramér’s theorem, which states that the empirical mean of a sequence of i.i.d. random variables satisfies a so called large deviations principle. Mogulskii’s theorem is concerned with the corresponding path space large deviations. To study the analogue of these theorems for a Riemannian manifold, we introduce a generalization of random walks to a manifold, called geodesic random walks. We present the analogues of Cramér’s and Mogulskii’s theorem for geodesic random walks and write down the rate function for these large deviations principles.

Abstract: I will discuss the motivations for introducing the notion of quantum complexity in physics, coming from the issues related to the information loss paradox in black holes. I will introduce the definition of complexity, the different proposals for its holographic computation, its inherent ambiguity, then present the computation for the case of a boundary/defect CFT.

Ridge, NY, 26 February 2020 — The American Physical Society (APS) has selected 147 Outstanding Referees for 2020 that have demonstrated exceptional work in the assessment of manuscripts published in the Physical Review journals. A full list of the Outstanding Referees is available online at http://journals.aps.org/OutstandingReferees.

The Summer School will take place from July 7 to July 17 2020 at the Institut d'Etudes Scientifiques de Cargèse, located on the west cost of the beautiful Corsica island, nearby the city of Ajaccio.

The purpose of this Summer School is to train the next generation of young researchers in the field of quantum simulation and, more generally, quantum technologies. Grouping together a diverse community as well as young and leading senior researchers, we expect a stimulating cross-fertilization of ideas, methods, and approaches, able to further develop this fields beyond the present frontiers.

Information about the Summer School, including a list of speakers and application forms can be found on the website:
https://quantsim2020.sciencesconf.org

Amor-Quiroz DA, Burkardt M, Focillon W, Lorcé C.
Study of the potential transverse momentum and potential angular momentum within the scalar diquark model.
Presented at the Workshop of QCD and Forward Physics at the EIC, the LHC, and Cosmic Ray Physics in Guanajuato, Mexico, November 18-21 2019.
arXiv:200608490 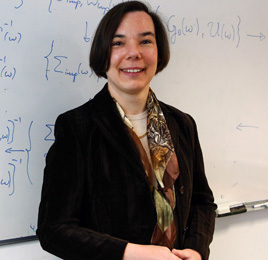